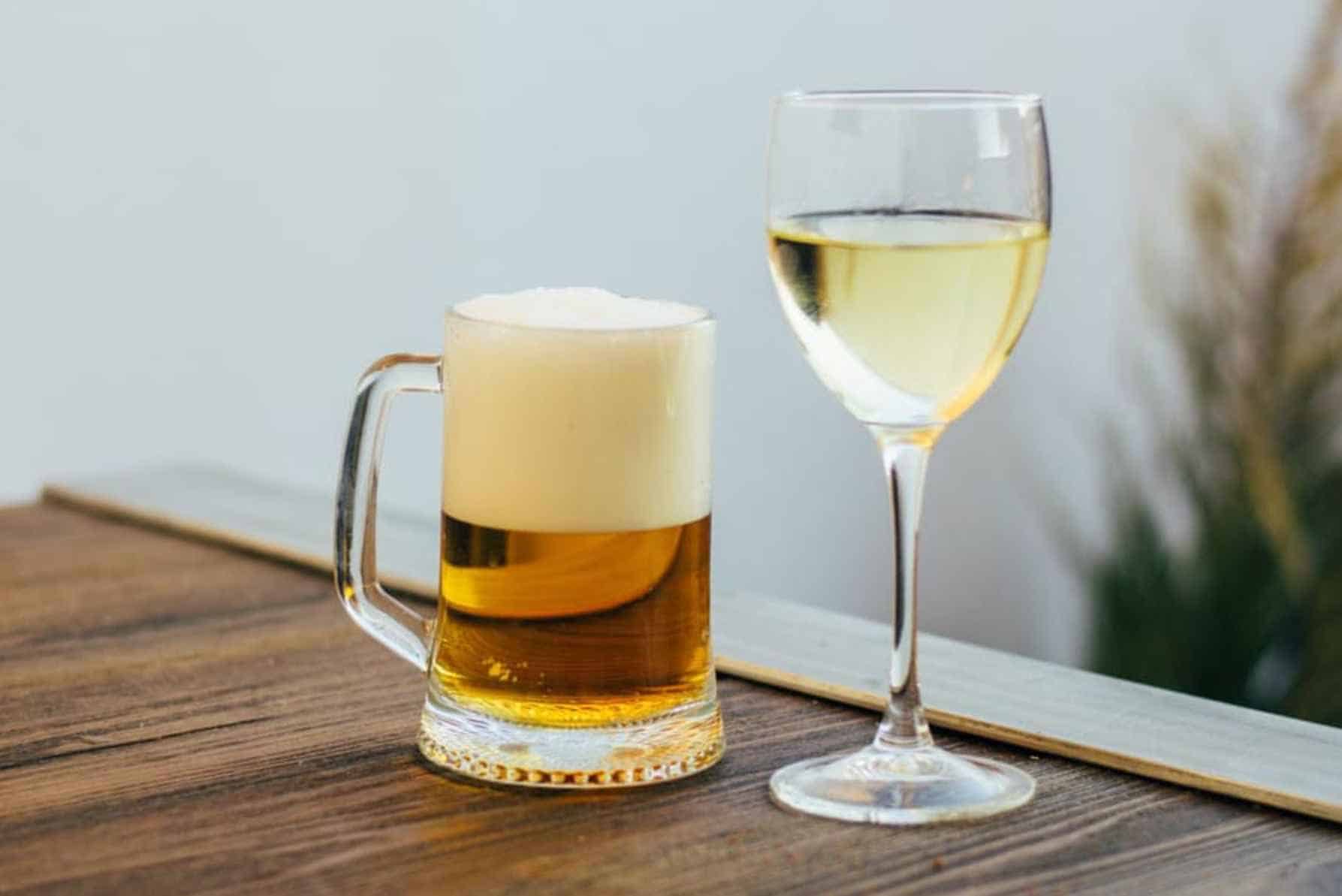 Although it’s a common misconception, most beers do not have more alcohol content than wine. With the comparisons, we can see how many beers are there in a bottle of wine. Whether it’s based on the ABV or pint, we will explain it all in-depth.

How Many Pints of Beer in a 750ml Bottle of Wine? 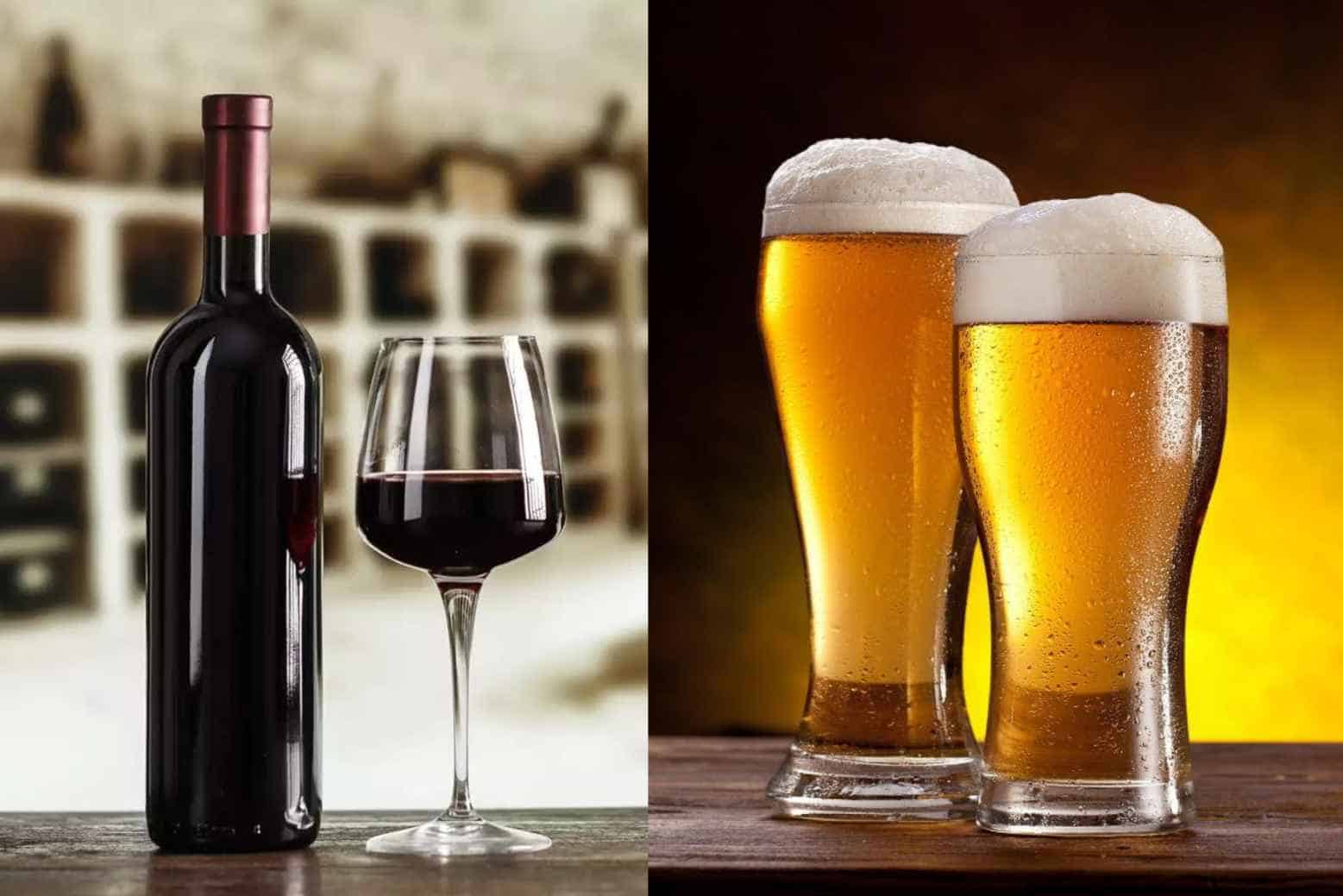 Commonly, wines come in a bottle of 750ml. Meanwhile, pints are 16oz. Wines tend to have higher ABV at around 12% to 15% per average. Meanwhile, beers have lower alcohol content and have an average of 4% to 6% ABV.

That said, we can compute that around 3.75 to 5 pints of alcohol are equivalent to a bottle of wine. However, this settles the equivalent between the standard sizes of bottles and ABV.

For example, the standard 12oz of beer has the same alcohol as a 4oz flight of wine. This means consuming the latter will make you drunker if consumed at the same amount as the former.

Of course, these answers will vary from bottle to bottle and what kind of wine and beer you are looking to drink. Some wine tends to be stronger than others, and beer is the same.

But as you can see, on average, the wine almost doubles the alcohol content of beer. If you are going out to drink, a large amount of beer will most likely keep you from being drunk compared to a large amount of wine. The amount of drunkenness especially applies if the drink is your standard table wine and canned beer.

Is Wine Stronger Than Beer? 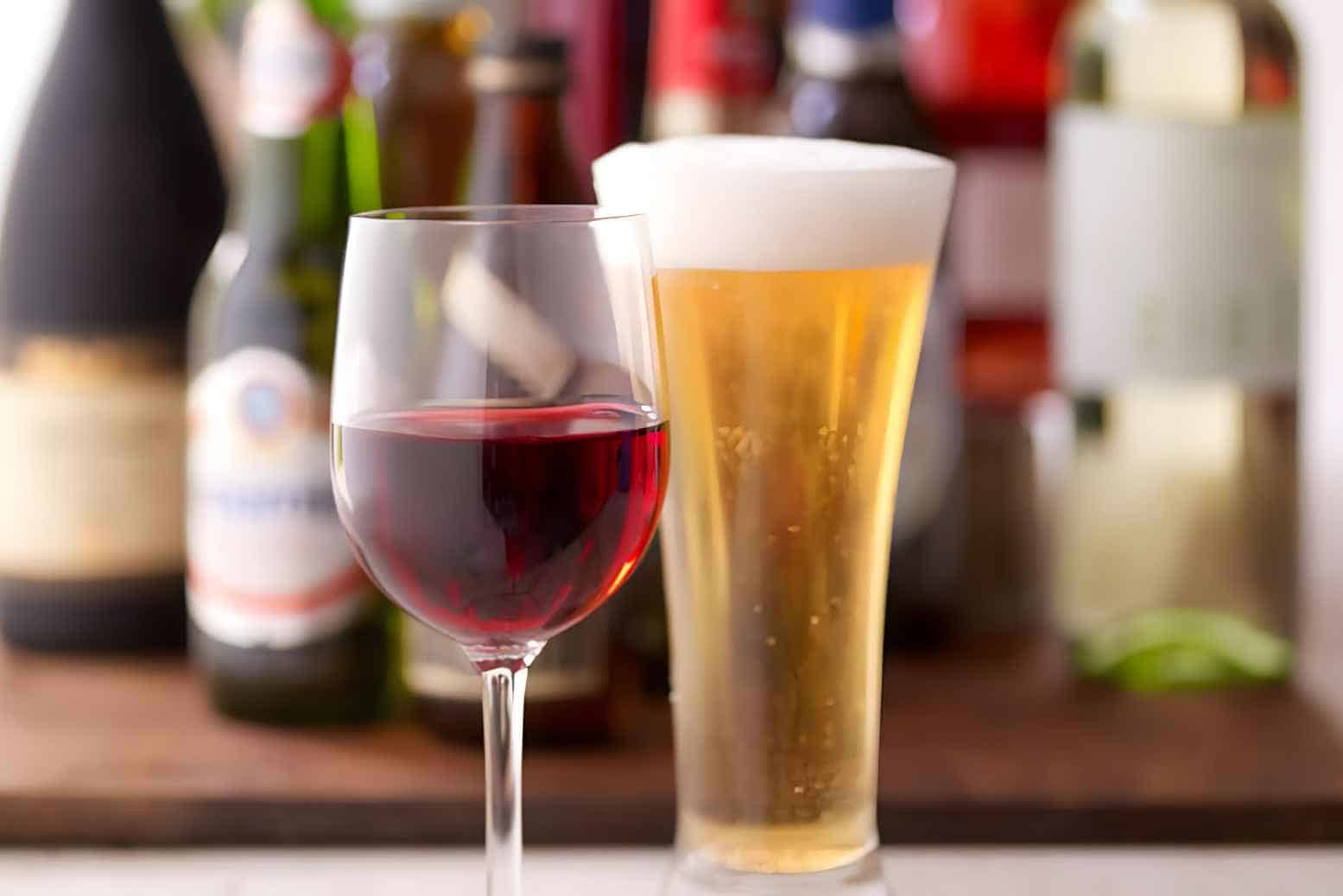 On average, wine is more potent than beer. However, like many beverages, the alcohol content between the two tends to vary significantly. Some varieties are high in alcohol, while some are low in the ABV section.

For example, the Brewmeister Snake Venom has around 67.5 ABV, which can instantly make you drunk—consuming Snake Venom in its entirety can cause alcohol poisoning, especially in people with lower alcohol tolerance.

Meanwhile, wine extremes tend to be around 20% at their height. This is due to the more natural way of fermenting grapes, which produce a smaller amount of alcohol content compared to beers.

When talking about the ‘stronger’ alcoholic drink, one might look at the ABV of the alcohol and its volume. Many ABV calculators online, such as this one, can instantly calculate the amount of alcohol in your drink.

If you are not a huge fan of using math while getting drunk like me, it’s an excellent way to ensure alcohol content.

Does Wine Have More Calories and Alcohol than Beer? 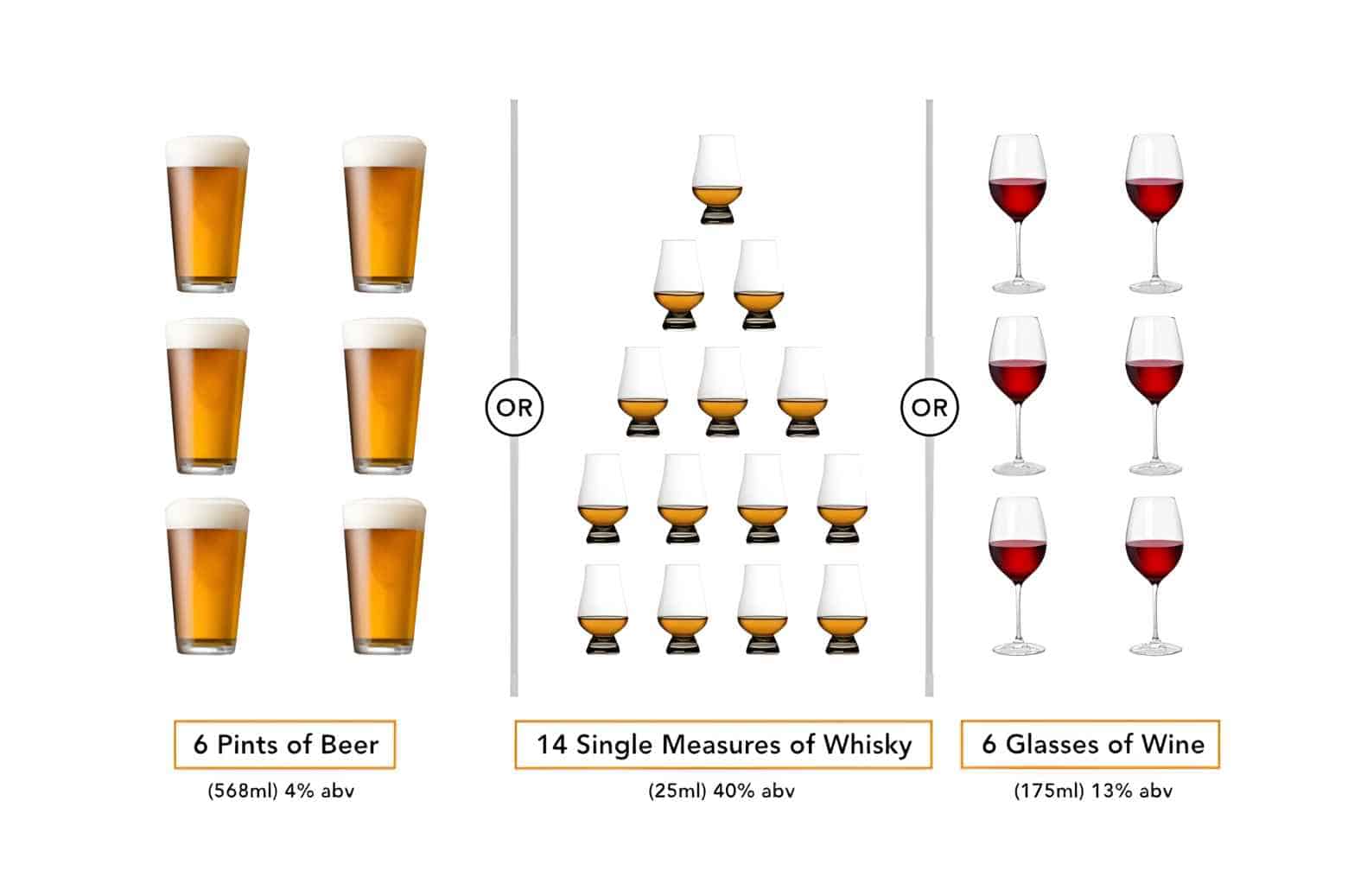 When it comes to calories, wine tends to have more than beer. If you take the lowest amount of calories in wine and beer, you can see that it’s much more significant. You will need double the beer serving to make a serving of wine.

When it comes to different wine, different amount of calories is also present. As you can read in the wine chart, the light variations of the drinks tend to have fewer calories. This is because they also have less alcohol content.

If you want a night out without gaining many calories, settling on the light versions of the alcohol will significantly help. Opting for a lite beer or smaller flight of wine can also lower your intake of calories. 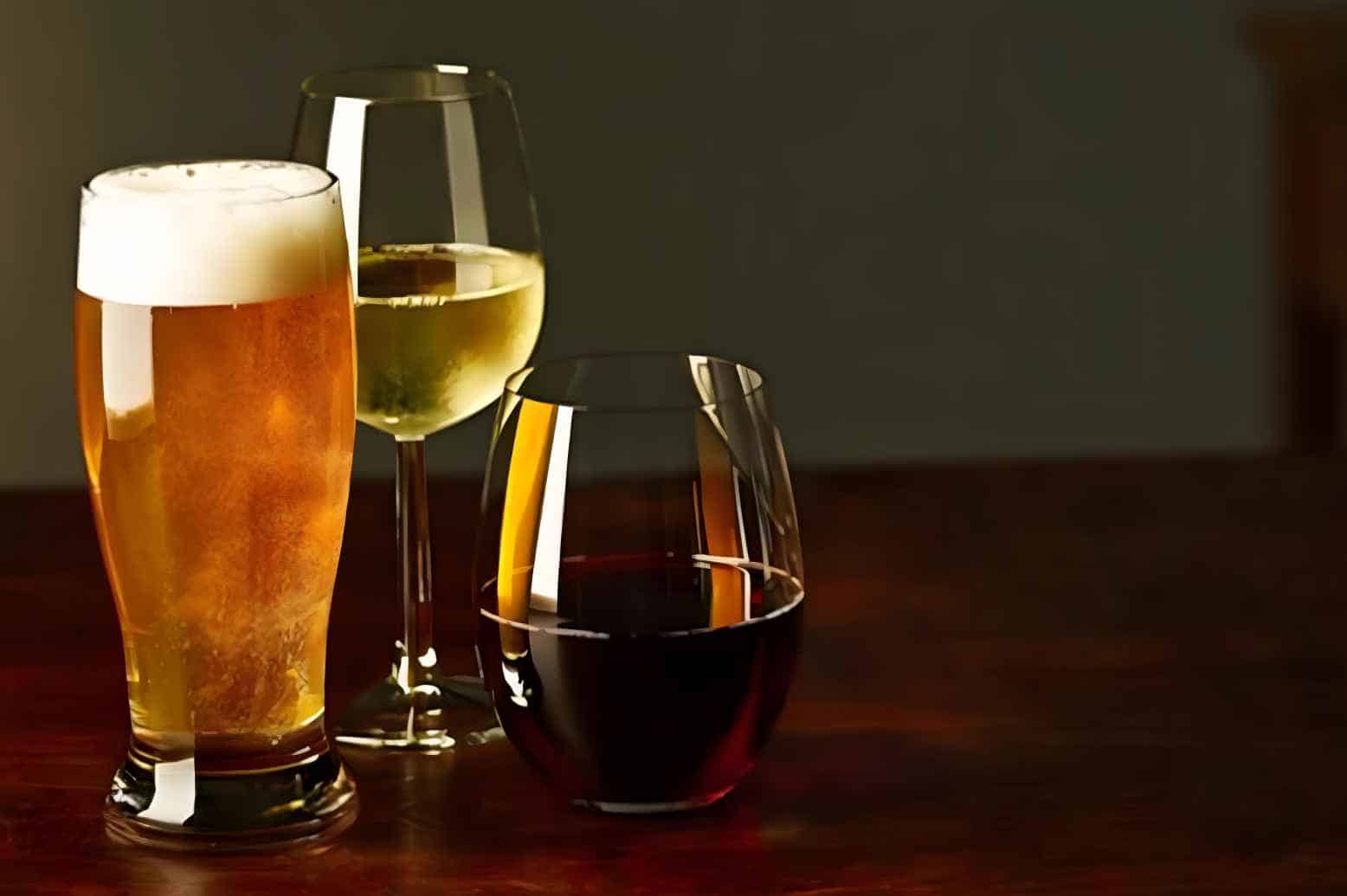 Although we already deduced the amount of ABV between beer and wine, let’s get into a deeper comparison through different wine and beer varieties.

When it comes to alcohol, wine tends to contain more than beer on average. Present in this chart, most wines tend to have 6% ABV on a minimum. Meanwhile, beer can go as low as 2% ABV.

When choosing wine, it’s best to stick to the dry or light varieties. As the flavors become sweeter and bold, the amount of alcohol also becomes more robust.

Sweet dessert wines and sparkling varieties tend to have more alcohol. The increase in sugar content is due to the fermentation process of wine. The longer it ferments, the sweeter and more robust the alcohol content is.

When drinking wine, it’s best to stick in the 5oz serving recommended to keep you from being drunk.

Beer tends to have a smaller amount of alcohol. A lite beer can go as low as 2% ABV, with the highest going to 9% ABV.

Although beers have lower amounts of alcohol, they are served with bigger servings. It’s not surprising to see a large mug of beer compared to the flight or flute glass of wine.

With beers, you can go higher and consume a 12oz a serving. It’s enough to keep you from being drunk while enjoying a chug.

How to Know How Many Beers is Equivalent to Wine? 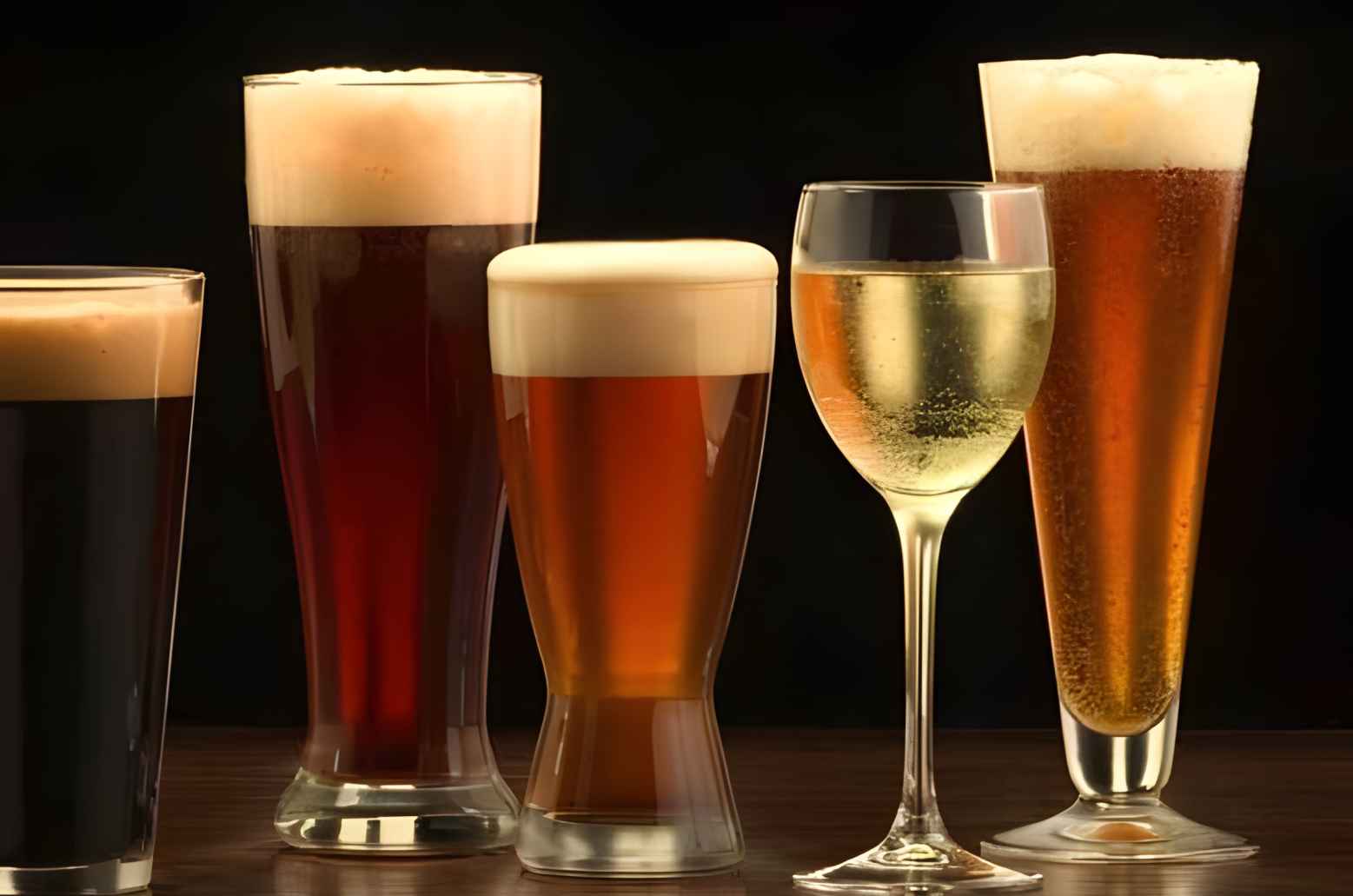 When converting the alcohol content of your beer to wine, it’s best to learn about the ABV or Alcohol by Volume of the drink. Although it differs from drink to drink, we are here to provide you with the resources you might need.

Most of the time, it’s pretty easy to compute the amount of alcohol on your drink. For example, you have 120ml of wine with an ABV of 10%. By taking the percentage, you can compute that you have about 12ml alcohol in that Serving.

This goes the same way with beers. A 120ml serving of beer with 5% ABV can have about 6% alcohol content.

Of course, not everyone can compute this on the fly. Fortunately, ABV calculators such as this one are available for free. You can even have a beer-specific calculator, which lets you choose between Plato or Specific Gravity when computing.

If you want an in-depth tutorial on the conversion of alcohol, you can watch this video.

Which is Better: Wine vs. Beer?

Since we are comparing the contents of wine and beer in terms of alcohol percentage, let’s get into more in-depth differences. If you are searching for this beer and wine question, you might look forward to alternating between the two.

Well, don’t worry! We will get into the specifics, such as:

Most questions about wine and beer are about their ability to make you drunk. Of course, everyone wants to enjoy a good old glass of wine or canned beer without getting too much alcohol in their system.

When it comes to limiting drunkenness, beer fares better than wine. As established earlier, wine tends to contain double or even triple the amount of alcohol compared to regular beer. You can even get a lite beer with as low as 2% ABV.

Regarding caloric content, beers tend to have less than standard wine. Since most wines have a longer fermentation process than beers, the amount of sugar, alcohol, and calories tend to be higher.

If you want a low-calorie drink, a lite beer is an excellent option compared to the standard table wine, which has around double or even triple the number of calories.

Wine tends to have more sugar content than beer. However, some varieties, such as dry wines, have lesser amounts. If you want a low-sugar drink, beer fares much better due to more low glucose.

When it comes to health benefits, wine is on top of any alcoholic beverage. Made from grapes, it uses natural sugars from the fruit to ferment the drink.

A healthy dose of wine every once in a while also provides a good amount of antioxidants. Red wine also oozes with tannins which are excellent for breaking down fats. The chemical also gives the wine a distinct red color.

However, beer also has some benefits, such as fiber and Vitamin B. However, it has smaller amounts of health benefits in the long term. 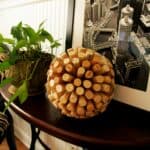 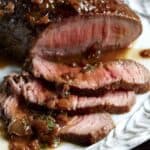